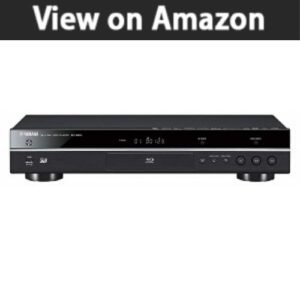 This Multi-Region Oppo UDP-203 will play ANY Disc, from anywhere in the world, PAL or NTSC. I would never buy any disc player that is not Multi-Region.

This unit will automatically play DVD regions 0-8 without doing anything. When it comes to Blu-rays, it is sometimes necessary to press a few buttons on the remote control to change the region code to “B” or “C”.

The sound quality is literally awesome. The elegant, solid quality, custom-designed disc mechanism, and electronics produce an incredible picture on the LG 4K OLED 65E79 UHDTV. When spinning a disc, the sound is barely audible – similar to a fan on a computer. The Oppo UDP-203 supports both the HDR10 and Dolby Vision HDR formats.

The Oppo does not have apps (like Netflix or YouTube) that are not needed with newer smart UHDTVs that include many streaming apps. Upscaling by the Oppo provides incredibly sharp pictures from standard HD Blu-Ray discs and even older DVD discs. Just amazing! And the audio sound quality is also incredible.

I’m using the Oppo mainly for 4K right now. Blu Ray is upconverted and yes, it does look great too. If there is one drawback with 4K is some movies (looking at you Billy Lynn) are hyper-realistic on my LG 65C7.

Too many wrinkles, too many freckles, too much realism. Currently, this is the only 4K player on the market that supports Dolby Vision. The only DV-enabled movie that I own is the Fate of the Furious. The picture quality is awesome. Again, sometimes much too realistic lol.

The unit’s remote is built like something from the 80s and I love it. It’s large and heavy with big buttons. The range is good (I bounce the signal off my ceiling since the Oppo sits away from the TV on an adjacent wall).

The only con I see here is with 4K and not the player. I feel like Al Bundy getting glasses for the first time and recoiling in horror when looking at a picture of his wife. 4K is maybe too good looking. Maybe more than I bargained for.

What was the issue with my first unit? I have some 4K disks that used to play but were now detected as invalid disks. I think my first player was ultra-sensitive to dust/film on a disk.

Cleaning my disks with warm water and liquid hand soap didn’t make a difference. Washing with scalding hot water from my kitchen (I really need to adjust the thermostat lol) and liquid dish detergent seemed to improve the issue, but my disks looked cleaned even before washing them.

Unless there was an invisible film that was washed out by scalding hot water this shouldn’t have made a difference. My replacement has been trouble-free.

The Oppo has an HDMI input which I connected to my Apple TV 4 (not 4K) and the Oppo upscales streaming from the Apple TV to at least HD Blu-Ray quality. The Oppo remote is large, relatively heavy, and easy to operate especially with the real backlighting of the keys.

Oppo includes an HDMI cable and a 91-page instruction manual printed in book-size on a heavy-weight paper with clear, sharp text. The instruction manual not only discusses the many various settings but provides advice on selecting the options. Truly a world-class product. I have absolutely no regrets buying quality which by far continues to exceed expectations.

The only negative I have experienced is the OPPO player freezes up a few times when watching the Passenger. I have watched about 10 UHD discs and this movie is the only one that has frozen up on me.

When frozen, I had to power the device off and on to get it to start playing again. I believe it may be something in the disc itself; the problem does not seem to be systemic or caused by a defect in the player itself.

If you want to know the other problems people face with this player, watch the detailed video below…

Competition: Similar options on the market

OPPO BDP-103: Amazing players play almost everything. You can buy this for the HD pictures quality. For the projector, it’s worth it to spend that money. But for a small tv your never gonna see the difference. Sound quality with FLAC files on the direct mode it’s beautiful.

One thing, I’m disappointing, it open iso files as a file, not as movies like on the computer or with WD TV media player.

Sony UBP-X700: The Sony UBP-X700 is a replacement for the former UBP-X800. The new player is smaller and more lightweight than its predecessor. It’s about the size of most recent Sony Blu-ray players.

The operation is very intuitive. When the opening screen comes up, press the open/eject button, insert your disc, and press play and you are done.

Can oppo-203 open video files from a data source like a nas, and if yes, can it open blu-ray images in iso-container, mkv-container?
yes, it plays from a nas, I actually have it hooked up right now like that. It does not play iso because oppo folks didn’t want to make it to play iso files. Yes, it does play mkv but only the ones that do not have cinavia.
Will this work in India with 220v?
Yes it will. Just change the power cord, that’s what I did. The cord that comes with the set is a 10A 125V US pin power cord.
Why are there two HDMI outputs on the back?
you can use one for video and the other for sound output.
Does this player handle pal disks, as previous oppo players have?
Yes, although that’s usually more of an issue for DVDs which, impressive upscaling notwithstanding. look pretty ghastly on a 4K, particularly if the large, screen. Blurays don’t use PAL or NTSC encoding, but you could have a frame rate and region lock issues (4K discs don’t have region-lock) with other players (all my Oppos are region-free enabled).

I’d recommend downloading the manual from the Opposite which is still active and\or the Oppo wiki http://watershade.net/wmcclain/UDP-203-faq.html. Although the UDP-2013 is a fabulous player (which I paid a handsome premium to get), note that Oppo has, tragically IMO, ceased production of their players so you might be better buying the Panasonic UB820 from a purely Bluray\4K UHD perspective.

Unfortunately, I don’t believe the US versions play PAL discs thought Australian models can together with NTSC, but they’re 220-240v. You might want to see if you can get a universal voltage\multi-region player that you like from 220-electronics.com: https://www.220-electronics.com/region-free-blu-ray-players.html.

Unfortunately, they aren’t top of the range but might be fine as an add-on player for your needs. As mentioned earlier, DVDs on a large 4K display will look pretty dire so either be prepared, watch them on a smaller 1080p display, or, ideally, upgrade to the Blu-ray\4K version where available. That’s my default choice but our budgets may be different.

Does this player, can reproduce SACD, cd, blue-ray DVD and more?
A player must be modified internally to create the region-free functionality, and I think there are several ways in which this can be accomplished, but aside from the original built-in region-restriction none of the functions of the player in its pre-modification state should be affected by the modification.

If you are contemplating buying a ‘new’ (as opposed to used) player, you should also be aware that, in my understanding at least, any all-region modification will void the manufacturer’s warranty. But OPPOs are such good players that it would be a very rare case in which an OPPO failed to work properly during the standard 2-year warranty period that OPPO provides.

I have found more than once that no adjustments with the remote are needed for DVDs, the player just plays all regions for DVDs without any adjustments via the remote. Switching regions via the remote are is always necessary for Blu-ray discs in my experience. You should ask the seller of whatever region-free player you have in mind what their player will require in order to switch regions.

It is also a good idea to make sure that a region free player can accept firmware upgrades without causing a problem to its region free functionality. That is something else you should ask the seller of the player you have in mind. Usually, firmware upgrades do not pose a problem in my experience, but I understand that sometimes they can if the sort of modification that has been made to the player is not a desirable one. I hope this helps.

What is the height of the player without the feet?
Looks like it’s 2 7/8″.
I do not have wi-fi. How would this unit be able to have firmware updates?
You can connect the device straight to the wired network of your household through the ordinary ethernet (internet connection) port on the backside of the device.

You can press the info button on the remote control to retrieve some interesting data about your disc. Unfortunately, it will not display the region code. The only way I have found to determine the region code of a disc is to use Apple’s “DVD Player” program and “Get Info” on the disc.

Overall, the Oppo UDP-203 comes with batteries for the remote control. Throw them away, and install lithium batteries. In addition to lasting about four times longer than alkaline, I have never seen a lithium battery leak.

This is John Wayne's website, and this is a bit of copy about him. He has a life long desire to test all kinds of tools and wreck them if needed. He has an engineering background, loves playing baseball and football, ran home to watch films, listened to The Jam and The Buzzcocks, and read magic trick books!

Planning to get the most effective heated chicken waterer around? Congrats! You arrived at the appropriate web page today. Prices for chicken waterer range from inexpensive to costly. We...

We provide unbiased reviews for top-rated products. Gear Mesh is the ultimate resource for learning everything about new gear, or information when trying to find the right one.

Gear Mesh is a participant in the Amazon Services LLC Associates Program, an affiliate advertising program designed to provide a means for sites to earn advertising fees by advertising and linking to Amazon.com